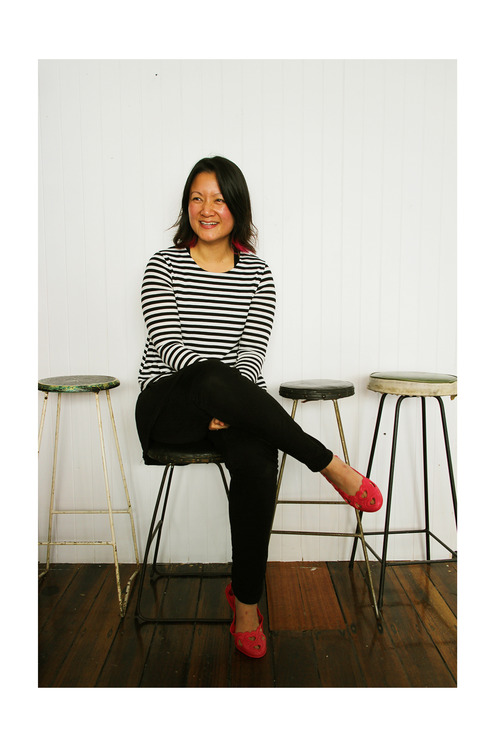 Interview with Chris Nguyen, author of Recipes and Refuge.

‘Damn it! I always mention pigs trotters in front of vegetarians’ laughs Christine Nguyen author of Recipes and Refuge which was released November 2013. Three women from not so obviously different backgrounds sipped coffee and metaphorically unpacked their lunch boxes.

One of the most prevalent issues in Australia today is refugee and asylum seeker rights. When Buffalo Milk chose ‘New Beginnings’ as the concept for their first edition, it was an easy decision to include a story on people seeking a new life in Australia. After attending the launch of Recipes and Refuge, we realised Nguyen and the team at Rag and Bone Man Press had done all the work for us ‘this year celebrating commonalities is so important’, says Nguyen on Australia’s current stance on asylum seekers.

‘I believe that we, as a collective body of humans, cant help but be interested in our fellow human beings, we want to know, learn and understand the stories and lives of others. We are ready to question the stereotypes presented and perpetuated by our politicians and the mainstream media.’ –RECIPES AND REFUGE

Recipes and Refuge is a beautiful book that shares the story of how Nguyen’s family journeyed to Australia by boat and includes recipes, poetry and tales from men and women who sought a new beginning in Australia.

‘If my family’s tale was just one single story of seeking refuge, and one small collection of recipes that our family could not afford to lose, then how many others were out there with a similar story to tell? This book is an acknowledgement of who we are, as told through the communal sharing of food, the stories of our lives remembered through meals together. This book allowed Chris’ mother, Jolie, to record the recipes from her homeland and finally share what it was to seek refuge in a new country.’ –RECIPES AND REFUGE

Nguyen grew up an only child in Perth, her earliest memories of food and cooking are of the family restaurant, she would munch on bean sprouts whilst her mother prepared mountains of meat, all the while hanging out for a pork chop ‘I never really learned how to cook, but I was always around it so when it came time to cook for myself I just kind of knew’. Being an author of a recipe book seems like a vast leap from adding egg to mi goreng but when you read Recipes and Refuge, it’s clear to see how humans have the ability to meet all sorts of challenges. From what Nguyen’s mother, Jolie, says about her first experiences of Australia in the book, you can only imagine how hard it must have been to create some form of ‘normality’ for her daughter.

‘To come to a new country like we did, you are completely naked. That’s what I did, that’s what happened to me. But from what I know and from what I’ve been learning all my life since I left Vietnam, I am still sad. I had to give up my family, and that broke me. For the first few years that I was here in Australia it was really, really hard. It’s like you’ve dropped out of heaven, into hell, not even onto solid ground! We had no idea about the lifestyle, people, food, culture- no idea about anything here!’ –(Jolie) RECIPES AND REFUGE

We asked Nguyen if she ever felt like she was different growing up to which she replied ‘you always think what you exist in is the norm, and it’s not until you’re older that you realize how different you were, I remember holding my hair up to the sun and saying ‘no my hair is not black it’s dark brown, I’m Aussie like you!’ and I was always relieved when lunch was a sandwich… I didn’t want to be different’.

As our coffees neared an end, we giggled over what foods our mothers made for us or didn’t make for us… we all wanted chips and roll ups for recess but our mothers didn’t want huge dental bills (every six year old’s nemesis). We had personified the book without trying – people sharing stories and food, and stories about food. There we were, three women raised in different households celebrating our commonalities and relishing in our differences.

Recipes and Refuge is available at Readings and good independent book stores.