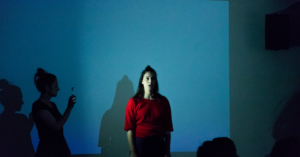 `Performative activism’ has become a pejorative term used to describe activism that is undertaken to increase one’s social capital rather than having a sincere devotion to a cause. The term has gained an increased usage on social media in the last five years in the wake of popular digital social movements such as #MeToo and #BlackLivesMatter. However, the term has roots in feminist and performance theory and was first widely used to describe feminist and other political performances and performance art. This thesis collects the empirical evidence to date regarding how and in what ways the internet (and social media in particular) has facilitated a global community of feminists who use the internet for a myriad of reasons, notably self-representation, communication and activism. This thesis forms the consensus that when the term `performative activism’ is used to de-value alternative acts of activism (i.e. digital activism, we must analyse and critique it.

This thesis explores feminist digital activism through performance using a unique interdisciplinary methodology. This methodology consists of ethnographic observation of feminist activism on social media (Facebook, Twitter and Instagram), 15 qualitative interviews with self identified feminist activists, a performance created from the ethnographic observation and finally an anonymous questionnaire and post performance facilitated discussion, designed to gain participants’ reflections. This thesis finds that there are unique insights that can be generated in social research when participants are provided an opportunity to experience the emerging data and findings through performance – and are invited to further reflect on their own responses. Based on the findings of this research, this thesis presents an alternative framing of `performative activism’, in turn challenging the negative connotations that have come to be associated with this term. This thesis argues that `performative activism’ does not equal `less real’; nor should it suggest a lack of sincere engagement and a failure of productive outcomes. Rather, this thesis contends that all activism can be viewed as performative; activism is performed, and performance is a powerful activist tool.

The first time was with a long-term partner, consensual, premised with “I don’t mind!” and the keen lust that occurs in those early years of dating.

The second time was unexpected and somewhat unwanted – a first date that escalated quickly and resulted in me throwing out my bed sheets the next day.

The third worried it was his own blood, “it’s happened before”, then held his bloodied hand up to the light and admired the glisten, not fearful or grossed out, calm and respectful knowing it was natural.

The last time was by myself in an attempt to relieve menstrual cramps, which had gotten worse since getting a copper IUD, it kind of worked but drugs are faster and more effective (for me).

Period sex has been on the menu for a while now, however, it’s only recently getting the airtime it deserves.

Periods remain taboo across cultures, we in the West still associate it with uncleanliness, continue to censor it in sanitary item commercials (periods aren’t blue, guys), and refer to it metaphorically i.e. that time of the month, shark week, Aunt Flo etc. However, dare I say, at least women in countries like Australia have the “privilege” of going to work and school while having their periods, as opposed to being ostracized from their communities, schools, homes and workplaces. This really happens. I understand my privilege as a cis, white woman with a pretty seamless history of menstruation, I understand my privilege allows me to flirt with the idea of period sex and write this article in the first place. In saying that I understand that this article will still crinkle noses and challenge people’s ideas of sexy sex.

Award winning U.S TV show Crazy Ex Girlfriend, created by Rachel Bloom, features a musical ode to period sex, which the network CW actually cut when it originally aired the episode deeming it “too dirty” for TV. Bloom released the full version online and was met with a resounding “YAS!” From women and feminist fans of the show.

You can watch the full version here.

Another show that addresses the societal shift towards optional period sex is Younger, created by Darren Star (Sex & The City). In the episode ‘A Night At The Opera’ the central character Liza (in her 40’s) and her younger boyfriend Josh (20’s) have a conversation about having sex while she has her period, Josh is pro and Liza is uncomfortable and unsure, she says “maybe it’s a generational thing”. Liza then talks to her bff, Maggie, about it and asks if she is into it. Maggie, who is gay, says if she didn’t get down with period sex she’d hardly ever have sex, unless of course her and her girlfriend were fortunate to synch up. Whether or not this is an accurate depiction of people’s perception of period sex, kudos for putting it on the Telly!

What this says to me is that there is a shift towards a more open, progressive and authentic understanding of what sex is like, or at least there are some people out there who are challenging the otherwise very glossy depiction of the kind of sex we’re supposedly having.

Now, period sex is not for everyone, because periods are not the same for everyone. Non binary individuals and men who get periods are less inclined to want to relish in something that has been associated with femaleness and womaness for centuries. Women whose periods are painful due to conditions such as endometriosis, or are negatively effected by birth control may not want to have sex on their period, because during that time the idea of doing anything other than sleeping or lying in the bath seems like hell. Women whose periods are particularly heavy or cause them to bloat may experience feeling self conscious or “unsexy”. However, for a bunch of people, having their period can make them feel sexy as hell. Your progesterone is at an all time low, which means your libido can kick into overdrive. You have an abundance of natural lubrication; which if you’re worried about mess lay a dark towel down or fool around in the shower! Also orgasms can help relieve cramps, so make this a priority if you’re the one in pain.

If you are having sex with one or more persons, you will of course have to get their enthusiastic consent first, please let them know there is a good chance “there will be blood”. If they haven’t had period sex before and they want to try it out but half way through they realize it’s not for them, don’t be offended! Stop, and respect that it’s an individual choice, blood can be scary if you’re not used to it. I’d also like to note there are many ways of having sex that can completely bypass menstrual blood when someone has their period e.g. non penetrative sex where the person who has their period uses a tampon or menstrual cup to conceal any visible bleeding. You don’t have to have sex on your period, and no one can make you have sex with them while on their period, but you can talk about it.

MENSTRUAL BLOOD IS NATURAL, NORMAL AND NOT AT ALL DIRTY AND IT’S TIME WE TALK ABOUT IT AND REPRESENT IT IN THOSE TERMS.