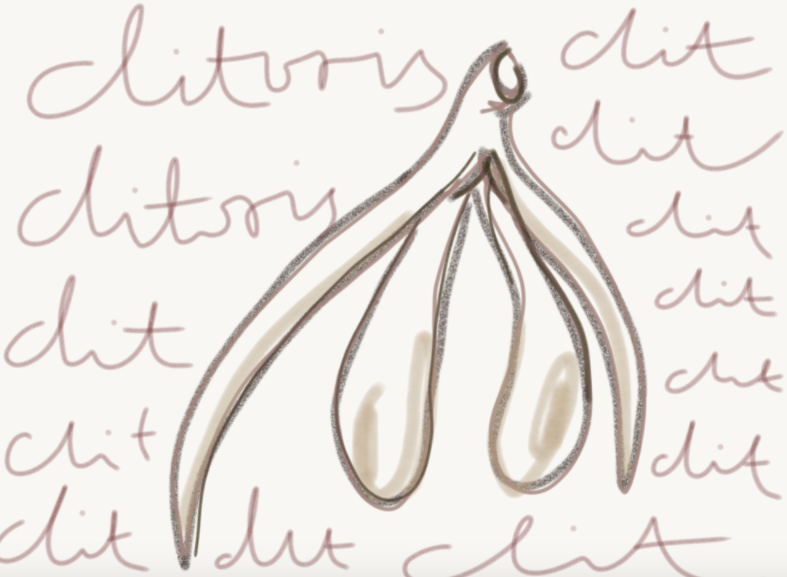 ‘Say my name, same my name, when EVERYONE is around you, say baby I love
you…’

You know, I feel like I can’t leave my house without seeing a dick. Whether it’s painted on trains, scribbled on the back of toilet cubicle doors, they’re everywhere! Have you ever drawn a dick on something? Like the back of a book? Or maybe your friend’s face when they’ve passed out at a party? Chances are you have! But, let me ask you this – have you ever drawn a clitoris? Where do you even start? What shape is it exactly? Where is it on the body? I’ve done this exercise with a number of live audiences and the results are always the same – no one knows how to draw a clit!

If you are like most, and are struggling to picture a clitoris, don’t worry. I was ilcliterate once too. It was actually an artwork by Sophia Wallace, called ‘Cliteracy’, that brought it to my attention. Her work explores citizenship, sexuality, human rights and bodies and she is to thank for the glorious clit puns sprinkled throughout this article. She has created multiple works that explore the clitoris.

As you can see (above) the clitoris is not simply the tiny button it often gets mistaken for (if recognised at all). Most of the clitoris resides internally, and everyone’s external clitoris is unique. Did you know that the clit technically wasn’t discovered until 1998? Just pause for a moment and let that fact sink in. It was an Australian Urologist named Dr Helen O’Connell, who was the first person to investigate and document the full scope of the organ using MRI. Of course Dr O’Connell didn’t invent the clitoris, but for many years there were so many misleading and flat out incorrect theories around this part of a woman’s body.

Sigmund Freud, one of the first sexuality theorists of the western world is famous for saying that orgasms from clitoral stimulation were infantile and that vaginal orgasms from penetration meant that a woman was more mature. This has perpetuated the myth that women have the best orgasms from vaginal penetration, when in actuality the clitoris is where that pleasure comes from. Studies have shown that women whose clit is within two centimeters of their urethra are more likely to orgasm from vaginal penetration, though it’s not a sure thing, keep in mind this pleasure is still derived from the clit, it’s a matter of proximity. This means that anyone’s body that deviates from that very specific make-up will not orgasm from penetration alone. This is not dysfunction, this is human.

For too long the primary female sexual organ has been considered the vagina, failing to recognize the whole package (so to speak), the vulva, and more importantly THE CLIT! It is the only organ that’s sole purpose is pleasure, it has over 8000 nerves in the tip alone, not to mention the additional 15,000 nerves that it interacts with within the pelvis (a penis has roughly 4,000), it can become erect when aroused, and its estimated size is roughly 9-12cm long and 6cm wide. Oh, to think what power women hold between their thighs!

Why is no one talking about this? Why are we not celebrating this? Why do we know exactly how to draw a dick with our eyes closed, and yet for the life of us, struggle to even visualize the full anatomy of the clitoris, even if we have one?!

We need correct sexual education, that prioritises the clit and women’s pleasure. We need visibility and representation of women’s sexuality, and we need to name the clit. Name it as a woman’s primary sexual organ, name it in equal measure to the penis.

Next time you see penis graffiti, I want you to stop and spare a thought for the clit. The part of women’s bodies that goes mostly unseen, and generates the most pleasure.

Or better yet, draw a clit and say its name.