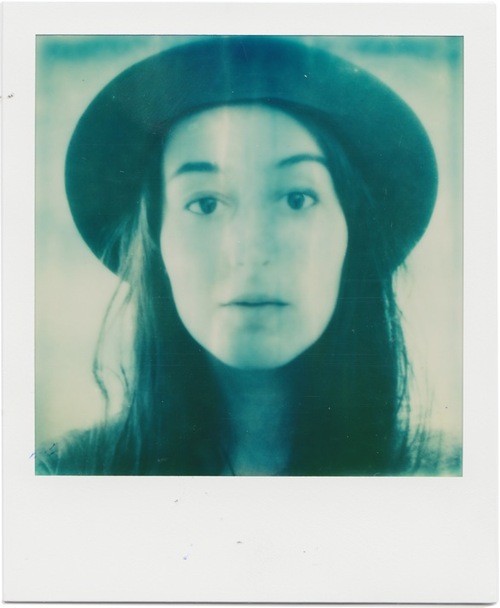 Self portrait, polaroid by Miso

Interview with Stanislava Pinchuk aka Miso, Ukraine born, Melbourne and Tokyo based artist.

Stanislava Pinchuk aka Miso embraces the term artist but is quick to correct any romanticised image of her job, joking that today’s artists aren’t exactly “sitting around smoking opium, having muses come and go, banging out a painting and then dying tragically”. Pinchuk says “there’s not a lot to my life outside of my art practice. Nothing is more rewarding for me than what I make.” Considering Pinchuk as someone who lives and breaths her art, working in various mediums from photography to stick-and-poke tattoo, we asked her to share some thoughts on the concept of life imitating art. Photograph and tattoo by Miso

“Sometimes I feel like I belong to other people, clients, galleries, waiting lists. Right now it feels a little like that. It’s hectic, but I never feel like a puppet on a string. I guess I’m a little bratty about being told what to do, so I’ll never do something that feels contrived”. It is the nature of being a working (working being the operative word) artist and Pinchuk is quick to verbalise her gratitude for the opportunities and the support she receives from galleries and buyers. “I don’t want to be a purist about it – the support of other people means the world. It’s a privilege that I’m so grateful for. Collectors know that I’m not out buying Lamborghinis. I think even the basic level of support is really, really amazing.”

Pinchuk’s studio is in Melbourne’s Nicholas Building, a building that dates back to 1926, and holds a rich history of artists past. One resident in particular holds a special place in her heart, Vali Myers (1930-2003), an Australian visionary artist, dancer and boho babe of the 50s and 60s. To be in Vali’s very studio has been a humbling experience for Pinchuk, who is often visited by Vali’s friends, saying “You know they’re going to be your kind of people”. Pinchuk’s career as an artist stems completely from a labor of love “I didn’t go to art school, so I feel like I’m always catching up. I go to galleries, and read a lot. I actually have a philosophy degree, I guess I wanted to learn what to paint about, rather than how to paint”. Starting out as a street artist at the age of 14, Pinchuk was already a working artist by the time she was 18 and contemplating a university degree. “I find the concept of grading artwork strange, you have to make work to suit your teachers and peers, not for you. My work has never been graded and I am forever excited to make art. My friends who went to art school would skip class, smoke rollies and complain about their print assignments. I mean it’s such a great opportunity for me to live and study in this country, I feel like I’ve won the lottery… but, I guess it’s hard to know what you want at that age. I’m lucky I did.” The concept of ‘life imitating art’ can be as simple as seeing something you like and creating a lifestyle from that. Pinchuk admits that “at the end of the day, the people I look up to most are people who, to me, were really one thing with what they made. Like Vali. She lived her work, spent a great deal of her life homeless and still never sold her work if she felt the work wasn’t as appreciated as it was by her. It just seemed like she was beyond time and place, outside of people, totally one with her work. I’m still really touched by that. People like Patti Smith, Yoko Ono, Louise Bourgeois… they’ve always really stood out to me because of that”.

One of Pinchuk’s defining attributes is her modesty. Her humility and ability to connect with others has proved fruitful, which she knowingly owes to “putting out positive vibes” and respecting her practice. “The best piece of advice I ever received was to take my practice as my best friend. If what you create is good, it will happen for you. Everything else, industry climbing… none of that stuff matters if you’re invested in what you do – I think people really sense that above anything else. And nothing else is as rewarding”. They say imitation is the sincerest form of flattery and Pinchuk’s interpretation of ‘life imitating art’ means honouring the artists she admires; people who created work that provoked and inspired, and those who lived their work and ‘became’ art themselves.