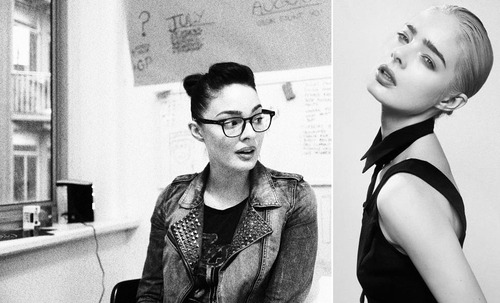 “I am an impatient person, I constantly need to be stimulated and I think that’s why it’s taken me this long to realize how much I have actually achieved, and changed as a result of that. When you start something [modeling] young you just go from job to job, week to week, year to year.”

Model, Lucy McIntosh, met with Buffalo Milk to talk about her personal experience with ‘change’ for this month’s issue. As Lucy approaches almost a decade of working as a model, representing international modeling agencies such as LA’s PhotoGenics, Muse in New York, Paris’ Crystal, M&P Models in London, and Australia’s London Mgt Group, ‘change’ is a topic she is well versed in.

Recently returning to Melbourne, after having based herself in the US for the last five years, Lucy is happy to be home and is taking time to reflect before making her next move.

“You need time to reflect in order to appreciate how far you’ve come and all you have accomplished. I really hadn’t noticed a change in myself until now, now that I have the time to look back.”

Working in an industry, renowned for it’s frivolity, competitive and ever-changing beauty standards and superficiality, the obvious question is “how has the industry changed Lucy physically?” However, Lucy’s greatest changes, in her opinion, have happened within. “When you’re young, you don’t understand you can be your own boss, I wanted to please everyone; people I admire influenced me a lot. The day I realised I was my own boss, I took charge in the way that I looked. I think my change in attitude has affected the way I look the most.”

Another defining moment for Lucy was when she made the decision to try her luck in the US market.

“I never thought I was going to be a model, I was going to be a teacher… I was looking for stability and then I took a risk. Moving to America impacted my life more than anything. I can relate to people better and I’m not intimidated or scared anymore. After living in NY where everyone is loud and has something to say, I learnt to speak up.”

Although finding her voice in America and carrying herself with great confidence, Lucy hasn’t forgotten her insecure moments.

“The industry has made me feel personally scrutinized at times, but mostly the pressure has come from myself. My profession requires me to change. As a model I have to change myself in order to sell ‘things’. When you’re a young model you take everything personally, then you realize one day it’s not YOU, you’re there to sell the story or the brand, and that requires you to become someone or ‘something’ else.”

Lucy is showing no signs of slowing down professionally, however, she is enjoying the change of pace from America while in Melbourne. Now making the time for herself to think “what next?”

“I am in reflection mode, trying to appreciate things more. I want to start a new chapter with those reinforcements from the last ten years. I’m more who I’m meant to be now. Asking myself “how can I be an even better Lucy? Better in my friendships, my relationship and in my work?” I have absorbed so much in the last few years and it has changed me – I’m working on embracing that.”